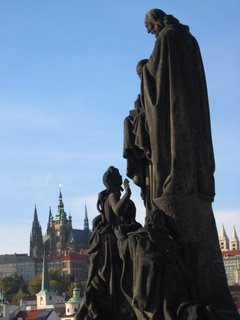 A visit in Prague is not only a cultural sensation but also a multilingual one. City guides, brochures, restaurant menus, store signs and advertisements, they all are in at least two languages: Czech and English. 50% of all were additionally in German, 20% in French, Spanish, Italian and Russian language! 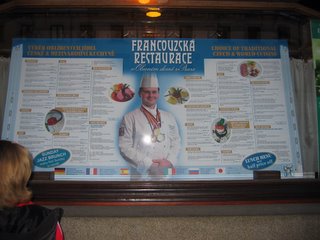 Multilingual menu in a restaurant window

A bit about Prague

The city on the Vltava River has been a center of European culture since the 14th century. From 1333 to 1774 many generations extended the Hradcany Castle. In the course of centuries a small city consisting of buildings and squares was created on the Hradcany Hill, crowned by the Gothic Cathedral of St. Vitus and the Romanesque St. George’s Church.

More than two hundred palaces in Prague’s Old Town bear witness to the attraction that the royal court once held. Walks along the Old Town, the spacious Wenceslas and Charles Square and the Old and New Town Hall stand for bourgeois traditions in this age-old commercial center. The Clementine Quarter is a completely preserved Baroque complex. Yet it is not only Prague’s secular buildings but also its numerous, often ancient, churches that draw thousands of tourists each year.

I demystify the translation process, helping you create an international strategy that fits your business needs and current capacity can-dos. Learn more